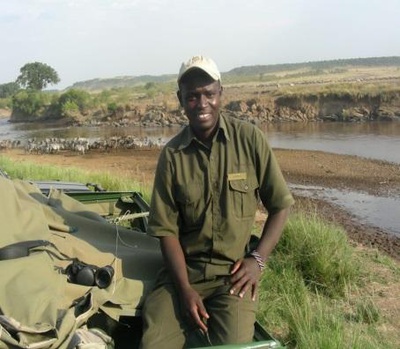 
← Go back to silver-level members page
Alfred was born 27 years ago near Mau forest, the largest indigenous forest in East Africa and the source of Mara River which flows through the famous Maasai Mara Game Reserve. At the age of 8 years, Alfred together with his age mates in the village use to take goats, sheep and goats to the grazing fields and it is at his time that he learnt the survival skills in the bush for he had to find water and wild fruits to feed on and to escape the wild animals that were moving in and out of their village. These skills later on became of great help in his guiding career. His father worked as a chef in Mara River Camp, one of the oldest camps along Mara River in Maasai Mara, and during Alfred’s school holiday he used to pay his father a visit and in the camp he would at some days accompany the Camp’s guides on game drives to the National Reserve or Bird watching along the Mara river which is full of Hippopotamuses and Crocodiles. And it is here that his interests on becoming safari guide started. His father organized for him to get some wildlife books and articles that he would read at his own free time and even before his elementary level of Education Alfred had the basic knowledge on the wildlife of East Africa especially on Mammals and birds. After his Elementary level of education at Ilmotiook Primary school in Narok County, he joined Ngiito High School in the same County where he became the School’s Wildlife Chairman for four years, and also as Environment Captain for one year. He joined Governors Camps in Maasai Mara where for two years he worked in Housekeeping, Front office and as a part-time Balloon crew. And it is during this time that Alfred worked for his guiding documents, and in the year 2009 he sat and passed for KPSGA Bronze level of guiding, and this is when he started guiding in Governors Camp which is home to BBC Big Cat documentaries. It is here that he got a lot of guiding experience and driving of 4x4 Landrover 110,109 and 101.He also speaks Spanish and he took several Spanish speaking guests on safari while at Governors Camp, also teaching some guides the basics of this language. He speaks little German too. In the year 2012, He sat and passed the prestigious KPSGA Silver Level of guiding. And in 2013 he travelled to South Africa for training on Nature Guides Course in Pilanesberg Game Reserve, Nylsvlei and Combretum Park, a course which is one of the best for all Field Guides in Africa. He has also done several short courses on Safari Guiding. He is currently working in the famous Maasai Mara Game Reserve for Orion Hotels-Mara Bushtops Camp and he is preparing to sit for the KPSGA Gold level of guiding. Alfred love his career of Safari guiding and his interests are on Big Cats, Bird watching and Botany,photography,but also he is an-all round guide, and too he enjoys nature walks and sharing information on the culture of different people of Africa.KARIBU KENYA.