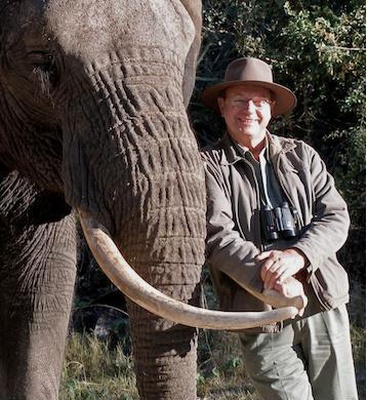 
← Go back to silver-level members page
Alan Binks was born in 1944 and was formally educated in England. After two years working at the Biochemistry Department at Oxford University, he emigrated to Kenya in 1967, drawn by East Africa's wealth of wildlife. He began by working as manager of a game-ranching research study but became involved in the safari business in 1969 and worked with Abercrombie & Kent for eight years, first as safari guide, then for two years as General Manager, before becoming a partner of The Original Ker & Downey Safaris Ltd. in 1980 (on the Board of Directors from 1982 to 2006). He still actively guides safaris all over Africa – some of his clients returning every year for new adventures - and in 43 years of designing and guiding safaris he has never done the same itinerary twice. Attention to detail and a personal immersion into nature are the hallmark of Alan's safaris. He has been a keen photographer since his youth in England, entering his first competition at the age of 15. He pursued this interest throughout his safari career, specialising in photographing wildlife behaviour and more recently Landscapes, using a large format camera. He now masters fine art landscape prints, both in the traditional darkroom and digitally, and holds exhibitions of this work locally in Kenya. His work is regularly seen in international magazines and books, in addition to his exhibitions and his own published work A Cry From The Wild. His images are the backdrop to the Hall of Biodiversity's African Rain Forest Exhibit in the American Museum of Natural History in New York. Alan is a pilot, having held both US and Kenyan Commercial Pilot's licenses and a FAI International Gliding Competition license, and actively flies powered aircraft and gliders when not on a safari.