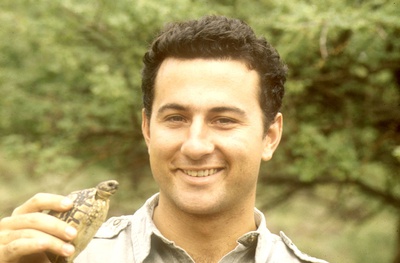 
← Go back to silver-level members page
Born in Australia in 1972, Howard Saunders was educated in Sydney at Knox Grammar School and graduated from the University of Sydney with an Economics degree. He is an expert skier, having attending a Ski Instructor's school at Blackcomb, Canada and proficient Rugby player, having spent his Sydney years playing at Gordon Rugby Club. During his time in Australia Howard gained his PADI Advanced Scuba Diving Certificate and in 1997 acquired a Private Air Pilots Licence. From an early age Howard had a love of the bush and all forms of wildlife. Since his first safari outing in the 1980s he has acquired an enviable knowledge of the African environment and the biodiversity of the wildlife to be found there. Howard began his safari career taking adventure-loving groups around Northern Tanzania, Uganda and the Mountain Gorillas of the former Zaire. He has travelled extensively throughout the African continent gaining a sound knowledge of the many wildlife areas, cultures and exciting locations to be found. Howard has some hair-raising tales of adventure and exploration to entertain his guests around the campfire. A firm believer that to conserve the wildlife you must first know something of it, Howard helped set up an Outdoor Education Program for African children of various ages, exposing them to not only the animals but to the particular environment each species lived in. Howard's patience with children and interest in their learning has given him a special appeal to families on safaris. Utilising specialised knowledge gained from his close association with a US funded wildlife research unit operating in the Masai Mara, Howard has conducted safari 'field trips' for undergraduate student groups from American universities as part of their zoology degree curriculum. Howard joined Ker & Downey in 2000 after extensive experience operating as a freelance guide for many of the major safari outfits in Kenya. Totally unflappable and ever the attentive host, Howard will delight you with the depth of his knowledge about all forms of African wildlife, including his special interest - invertebrates – the extraordinary world of insect and spider fauna to be found in Africa. Howard lives in Karen, a suburb southwest of Nairobi near the Ngong Hills, named after Karen Blixen, author of 'Out of Africa'. When not on safari he enjoys playing rugby with his local club the "Nondies" or a game of squash or tennis. Recognising his knowledge and administrative abilities, the Kenya Professional Safari Guides Association seconded Howard to assist with the setting and marking of examination papers as part of its on-going program of establishing qualification gradings for safari guides operating in Kenya. Howard presently holds the Silver Guides Certification, which is the highest official guides qualification presently available in Kenya.