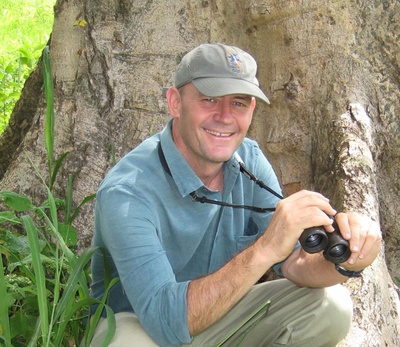 
← Go back to gold-level members page
Richard Knocker Guide Richard was born on a farm in Kenya in 1963 and from his earliest years, has been going on safari. A stint in the UK to complete his education at Edinburgh University, studying French and Business, was followed by six years in Turkey, where initially he taught English and translation at Marmara University in Istanbul. Thereafter, he joined a top American adventure travel company, leading trips and expeditions throughout Turkey – sailing and cultural /archaeological trips along the Aegean coast to walks in the Kackar Mountains. The first Gulf War had a devastating effect on tourism in Turkey, so Richard and his wife, Jules, moved back to Kenya to run a camp on the edge of the Masai Mara. The pull of some of Africa’s greatest wilderness areas soon brought them to Tanzania and in 1994, they joined Ker & Downey Tanzania, for whom they set up and managed camps in Tarangire and the Serengeti. With the ownership of the Ker Downey camps transferring to Mashado in 1996, they moved to Kusini Camp, on the western edge of the Serengeti Plains, which became their home for nearly three years. It was here that Richard gained much of his knowledge and experience of the Serengeti and introduced his trademark walking trips in the surrounding areas. In 1999, Richard decided to pull away from camp management and concentrate on full time guiding. He joined Nomad Safari Guides (Nomad Tanzania) and was a driving force behind their efforts to develop new safari ideas in exciting destinations, as well as helping mould a new generation of motivated guides through his involvement in the company’s guide training programme. He also spearheads their community conservation efforts in northern Tanzania, as well as engaging in conservation issues at all levels. And of course, he continues with his guiding on a free lance basis, not just for Nomad and his own company, The Map’s Edge. In May 2011, he achieved his Gold Accreditation for the Kenya Professional Safari Guides Association. His passion for the bush life remains undimmed and he revels in the opportunity to introduce likeminded enthusiasts to the joys of the African wilderness. He is endlessly fascinated by the whole spectrum of the wonderful show that Nature lays on for us. Follow his travels on http://privileged-observer.blogspot.com