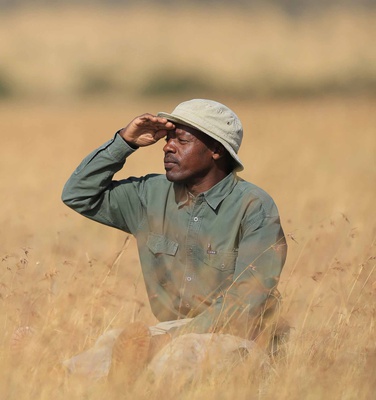 
← Go back to gold-level members page
Paul was born just on the northern edge of the Masai Mara game reserve. As a young man, he worked as a herds boy, and learned tracking, signs and alarm call interpretation as a necessity for survival in the bush. These skills have proven advantageous to him during his 20-year career as a guide, helping him to lead journeys to Kenya, northern Tanzania, Rwanda and Uganda. He has worked with the BBC Natural History unit as a special leopard tracker and consultant for the Big Cat Week and Big Cat Live programs since 2003. He also took part in “The Truth About Lions,” “Planet Earth Live” and helped develop the story behind Disney’s “Africa Cats.” He has also been instrumental in research on the vultures in Maasai Mara game reserve in conjunction with the Department of Ornithology of the National Museums and the Peregrine Fund. Paul received his career education at The Kenya Wildlife Training Institute, Kenya Utalii College and Inkwazi Rangers’ School in South Africa and St. Paul's university. He was nominated by Conde Naste world traveller as the 4th of 25 best guides in Africa; http://www.cntraveler.com/daily-traveler/2013/11/best-safari-guides-in-africa. Paul now together with other professional safari guides run privately guided photographic and family safaris and enjoys sharing with his guest his experiences and tales from the bush where he loves to work in.