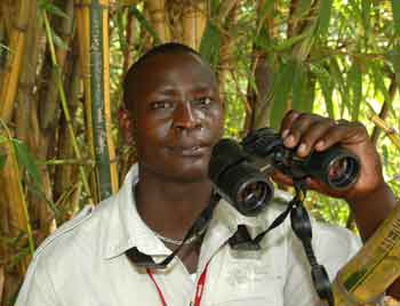 
← Go back to gold-level members page
James was born in kikuyu escarpment bordering Nairobi to the Northwest . At an early age in primary school in the 80’s, he started visiting the National Museums of Kenya and Nairobi National park as a Scout member. This is how James fell in love with nature and made the Museums and the Parks his permanent homes. James completed secondary school in 1992; he had no doubt about what he wanted to do in life, so he transferred his hobby into a permanent career. He spent much time in the libraries of the Museums doing studies of Natural History between 1993 and 1997. The fields he tackled range from Mammalogy to entomology, botany to Oesteology, Ornithology to Anthropology and Geology. In 1997, he took his first exams in Tour Guiding. He has been a member of Nature Kenya for over 10 years and the activities included are Bird Walks, Tree Walks and Insects Walks all over the country from Mt.Kenya to the Indian Ocean. He has also taken various long and short courses on most of these fields. James has spent over twelve years as a Tour Guide most of it stationed in various National Parks and Lodges for years doing day and night game drives, Fishing and Swimming in the Rivers and Nature walks. He tapped most of his knowledge from guides from Zimbabwe whom he has shared time with at the camps. James’s enthusiasm has made him a presenter where nature is the theatre. He is fluent in English, French, Kiswahili and Kikuyu his local dialect. His ambition is to learn as many foreign languages and be able to interpret the natural life to as many people in the universe. He is married with two charming and outgoing boys. James is among the few Gold Level Guides out of thousands of other guides all over the country under the membership of Kenya Professional Safari Guide Association (KPSGA), member of Youth for Conservation and Arocha Kenya. My message is book a safari with Vintage Africa and come on safari to Kenya ready to be converted to be a Bird Watcher because it is when you stop for the bird on the tree then you realize there was a Leopard having a siesta on the same tree. Happy birding.